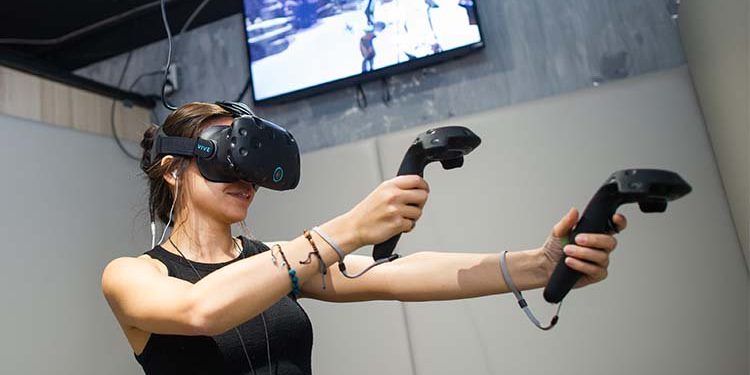 The popularity of Virtual Reality lounges and arcades in Toronto has been steadily increasing since the release of consumer version VR goggles Oculus Rift and HTC Vive in late 2016. This increase is not merely due to the novelty and immersiveness of the technology, but due to multiple reasons and factors from both the demand and supply side.

Want to experience Virtual Reality with your team for your next event?
Check out our Corporate Event page and see what VRPlayin can offer you!

Of course, there are also the free-roam VR pioneers such as The Void and Zero Latency VR, both of which have found great success in the US and Australia.

Because of these successes and little competition in metropolitan areas like Toronto, many people are beginning to see VR as a viable business idea and are forecasting huge market potential, thus leading to more and more VR lounges and arcades in the city.

Cost of VR goggles and PCs

The cost of VR goggles has dropped close to 30% ever since they were launched in 2016. However, the requirements of high-end desktop PCs remain high, especially thanks to the cryptocurrency mining industry. In addition, room-scaled VR requires at least 8×8 feet of empty space, space which is scarce in metropolitan areas. Therefore, the consumer adoption rate of room-scaled VR setup as of 2018 has remained low, actually creating a transumer market where users value the experience of something more than its ownership, meaning a niche demand of public VR entertainment is on the rise.

We are all aware of one drawback of Virtual Reality: isolation. When someone puts on the goggles, they are immediately isolated from the real world thus limiting the interaction with friends, family, and co-workers. Although it’s difficult for many homes to be set up to allow it, interacting with others in VR brings Virtual Reality experiences to a whole new level. To be fully isolated from the reality with friends, to cooperate defending a castle, to solve puzzles together, to compete with each other, to communicate and interact with each other in a fantasy world is no different than playing sports in real life but with much much more possibilities of the activities that are only available in books and movies. With the awareness of the social benefits of VR on the rise, more and more families are putting VR entertainment as one of their top choices.

The social aspect of VR is just a start. Team building in VR, which can be more effective than traditional activities due to isolation from the real world, is also gaining the attention of many corporations. Where colleagues can focus on interacting with others, regardless of whether they are trying to achieve a common goal or competing with each other, can help emphasize the importance of accurate communications between co-workers and assist in achieving the bonding goals of team building.

VR lounges and experience centers taking over Toronto is part of a global trend. It signals the novelty of the technology combined with a rise in consumer awareness, one that understands the benefits of social and team benefits of VR.

The Best VR Experiences for a Corporate Event
August 3, 2018

How VRPlayin Differs From Other VR Centres
May 1, 2018

Going Mobile With Virtual Reality For Your Next Event
January 30, 2018