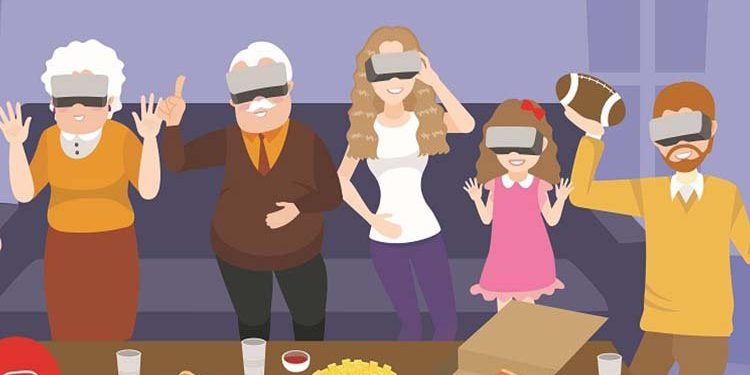 By now, the words Virtual Reality should have a familiar ring. Consumer VR has been hyped for three years, our physical location on College Street has been open for over a year, and at the end of last month, the blockbuster Ready Player One was released. Even if the specifics of VR are fuzzy, that’s okay. That’s what these posts are for – going deeper on how VR is changing our world.

Contrary to what you may believe, the vast majority of virtual reality headsets are in people’s homes. People have spent hundreds, if not thousands, of dollars on hardware that they use primarily for entertainment at home, hardware they use in 2 ways:

Most games based around a story have you play them alone. It’s more captivating and can become more personal when you form deep attachments to the characters. When VR first became widely available, one of the first games I played, The Gallery – Episode 1: Call of the Starseed, was a story driven, puzzle based title that kept me hooked from start to finish. Not long after, Arizona Sunshine came along, followed by Fallout 4 and The Elder Scrolls: Skyrim, both of which have made their way into the Virtual world. For these last two titles, countless players have spent hundreds of hours and have yet to be satiated, still leaving unfinished all that can be finished or having yet explored all that can be explored.

Although limited, games like Fallout 4 and Minecraft give players room to modify and manipulate the world, making them how they see fit. Similar to this trend, the future of single player VR will be massive expansive worlds, worlds where you are the hero of your own story, a story that never truly ends.

There is a reason why the first consoles came with two controllers: games are more fun when you’re playing with friends. But VR is different as there can be only one user of a VR system connected to the PC. Understanding this, two approaches were taken to bring the multiplayer experience to VR. First, like popular Massive Multiplayer Online games or Arena Multiplayer games, multiple headsets can be connected through the internet, allowing people to share the same experience or play the same game from their own houses. Alone in the real world, alongside friends in the virtual one.

The second approach are asymmetrical games, like Mass Exodus for instance, where one player is The Seeker in VR, and up to 4 other players are rogue androids. The Seeker will use the virtual space to look for and identify the rogues, while the rogues use console controllers or the keyboard and mouse to elude the Seeker and destroy it. Alone in the virtual world, with friends in the real one.

As the technology matures there will be more integration between mobile devices and asymmetrical games. Jousting is a good example of this, while on the online multiplayer side, social experiences such as VRChat, Rec Room or Alt Space are creating a microcosms of experiences that allow you to do a lot of different things with a whole lot of people. Moving forward, just as we’re seeing the trend with PC and console games, the level of customization and interaction will come closer and closer to that of a single player experience.

This is where we come in, literally. From Arcades to Lounges to VR Experience (or entertainment) Centers, venues like ours offer the public a taste of what VR can do. But the industry consensus is that we’re just scratching the surface. Virtual Reality comes in many shapes and forms and at the end of the day, venues will continue to have technology that may be too expensive to get at home, or more specialized things like 4D racing and flight simulators. Business owners have learned from the mistakes of the past and are constantly adapting to the changing landscape, and in their fight with the competition will continue to innovate and develop better ways of serving patrons, while adopting or creating technologies that go beyond what people can get at home.

Curious about the virtual world as it stands today? Schedule a free demo & tour at VRPlayin and see why everyone is talking about this new exciting technology:

We often hear people say things like “I want to see an interactive VR movie”, or “I want to use VR to be in the movie”. But what these claims fail to realize is that what they want is no longer a movie. As Jeremy Bailenson, co-founder of Virtual Human Interaction Lab at the University of Stanford put it in his interview on the recode podcast:

“When you have a listener to a podcast, you have her attention. There’s no other sounds going through those earphones. In VR, if you want somebody to look at a specific spot at a specific time, you can’t force that.” “VR is anarchy, people can look anywhere they want. Film is fascism. It’s great! The director tells you where to look, when to look, and they have your attention.”

So what do you do when you want anarchy but still want a story? You do what the makers of Asteroids did. You create a story where action and inaction have consequences, a story that will move forward with or without you, and the characters will react to you accordingly.

Ready Player One, the book, had a nice theory of where this could lead. It had Wade,  the main character, assume the role of a character in a movie, one where he was supposed to act in the same manner as the character. But unlike a movie where time can change from morning to evening in a second, Wade had to go through all that that was cut out, acting like the character would act. And based on knowledge of the actual movie, be where he needed to be at the exact time, and say the exact lines. This may be extreme, but we all have our own favorite movies – those we’ve seen too many times and to which we know all of the lines. Soon there may be a future where VR will become what we now know as cinema.

Wouldn’t you want to be in it? To live it?