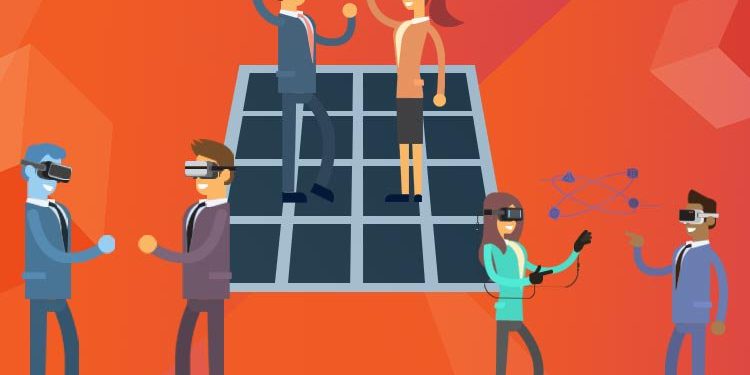 It’s fair to say that throughout its history, virtual reality has mainly been considered a singular experience, and hasn’t been thought of as a group activity. Whether it’s playing on your phone or at home on your PlayStation, for many, sliding on a VR headset is a solo expedition, a singular escape from the real world.

The truth is that VR doesn’t have to be that way. Whether it’s online or in a virtual reality experience center such as VRPlayin, group activities within VR have exploded in popularity and are game changers for the future of the tech. If you want to see where VR is headed, come on down and check out some of today’s most popular group activities.

Sort of like Second Life or Habbo Hotel, VRChat is a place where people can hang out with other users through the use of virtual avatars which are capable of supporting audio lip sync, eye tracking and a complete range of motion. Not only can you hang out, but you can also get in adventures, create your own worlds or compete in mini-games such as capture the flag, the bank robbing game ‘Steel ‘n’ Gold or lob digital discs at each other in Battle Discs. As it continues to grow popularity around the world, VRChat is a place where you’ll no doubt make some new friends.

Rec Room is a social game from Against Gravity that is as ambitious as it is fun. Remember the recreation centers of your childhood? Well, it’s like that, only a thousand times bigger. Like Roblox and Minecraft, graphically, the game itself is fairly simple. What makes the game so fun is the interaction between you and all the other visitors to the Rec Room and the games you can play there. Besides the usual rec room activities like paintball, dodgeball, and LaserTag, Against Gravity is gradually adding on more and more challenging co-op quests like “The Rise of Jumbotron” and “The Curse of the Crimson Cauldron”. These quests are extremely challenging and require extensive coordination and honed skills to complete. We have covered Rec Room’s experiences in this content series blog post if you are interested in learning more.

Check out VRPlayin’s Corporate Event Page in consideration for your next group event!

Run of Mydan is one of those games that seems to have come out of nowhere but is quietly getting a lot of attention by VR owners. It’s an experience of being a cyborg Spartan where you control an entity that’s shackled to a moving platform. As your stand glides through the sky, you’ll need to defend yourself from incoming enemies and obstacles that attack from all directions. A PVP game that supports up to 10, players are divided into two teams and earn points by hitting your opponents with cyber spears and orbs. We went more in-depth on the mechanics of the game in our blog post found here.

One of the top-selling VR games ever developed by Vertigo Games, Arizona Sunshine is a zombie apocalypse adventure complete with a long campaign mode, full of thrills and excitement. The co-op and survival modes, which can support up to 4 players, were released a couple of months ago and took the game to a whole new level. Communication, coordination, and whatever strategy you can come up with are required to survive an onslaught of zombies, the number of which grows with each passing wave. You can read a more thorough elaboration of the experience in our Arizona Sunshine blog post.

Playroom VR comes free with the excellent PlayStation VR and includes a series of mini VR party games. For the most part, you’ll need a few extra PS4 controllers on hand, but it will be worth it. You’ll get to chase your friends as a giant monster, hide as mice from a vicious cat, go ghostbusting and more. Some of the games are cooperative and others are competitive, offering a great mix of teamwork and versus play. The Playroom VR is a no-brainer for VR party gaming on PSVR and doubles as an excellent introduction for new VR players.

These are the most popular party games or team building activities you can enjoy with your family, friends, and coworkers in Virtual Reality. Although the choices are not abundant yet, these interactive VR experiences can really give you a taste of the virtual world depicted in “Ready Player One”. And this is only the starting point – the experiences will only get better!