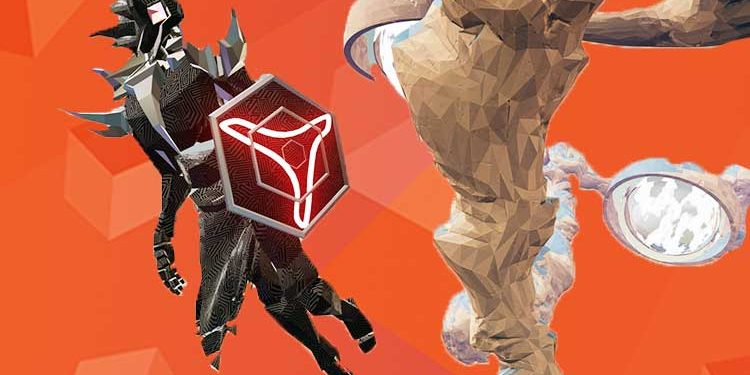 Due to the novelty of VR, those who are building games for it often come from the gaming world and as such tend to think in traditional game design. Though this has led to amazing experiences, innovation is usually minimal; people don’t risk doing something wildly different all that often, and that’s what I admire most about the people at Virtew, the creators of Run of Mydan.

Today, as part of the ongoing Multiplayer Content Series, we’ll discuss our first 10 player experience, one where l feel like I’m part of a fight between Greek Gods every time I’m in it.

As mentioned above, innovation is one of the first things that jumps out as soon as you start the game and after a quick exploration of the controls, you’ll learn that you can fly. The next thing you’ll find, as you reach out to interact with the games interface, is its art style. It’s reflected in your avatar, in how your hands look, and in the world around you. No other game in our catalog has a look as unique as Run of Mydan, and apart from Rec Room, no title has more complex character customization features in our catalog as of writing. Which is of course important as you want to look cool when you are shooting or impaling your opponents out of the sky.

Impaling you say? Well, if you manage to meticulously throw a spear and anticipate your opponent’s movement resulting in an instant-kill, then yes, impaling. Sure, you can fly to them and stab them if you prefer, use a machine gun or a good old fashioned grenade, but given the difficulty and luck required to land a spear throw, I wouldn’t say that any of them would give you the same amount of satisfaction.

Moving on to gameplay, the experience currently has a single player story, but the dev team is working on a 2 player co-op mode for it, and depending on the length of the co-op story, it’s safe to assume that it will provide an excellent avenue for pair bonding, similar to Arizona Sunshine and it’s 2.5 hour story. But we’re here to talk more about the team building aspects of Run of Mydan, and in this fashion it more than delivers. While Free-for-All can be a fun, chaotic experience and Team-Deathmatch (aka TDM) being a more individual game than the name implies, the hidden jewel of Run of Mydan is “Domination”.

While a simple feature to implement, Domination mode’s impact on team dynamics is massive. The way it works is 2 teams of 5 players fight for control of 4 points on a map, and once they’ve gained control they must hold the points until a timer runs out. The team that holds the points the longest wins but no team can successfully hold all 4 points indefinitely, or even at the same time. As mentioned in previous posts, improving one’s communication skill is not only beneficial professionally and socially, but also in Domination mode, where the importance of communication, sharing information and making tactical decisions is paramount.

To win at Domination players must be agile in adapting to new situations, communicating their intent to the team, and quickly deciding on a strategy. Moving together with a common objective and knowing what the rest of the team is doing is imperative as moving alone, blind and deaf, is fatal. When going deeper into the game, assigning role attribution and team leaders each game will allow natural or trained leaders to fare better at organizing the team, just as embolding people to speak up will better develop upward communication in an office space. It may also allow parents reasons to gloat about how their child is a natural born leader.

And with that, I will bring this post to a close. I will be taking a break next week, but at the beginning of February we will arm ourselves with sword and shield, bow and arrows, and venture forth in a fantasy quest with Trickster.

Want to try fighting and flying for yourself?
Check out our Corporate Packages by clicking the button below in consideration for your next event: