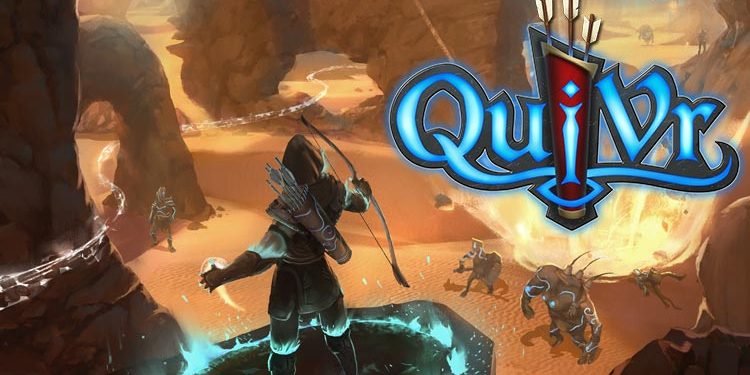 Ever dreamed of being Legolas? Not Orlando Bloom, with his flowing long blond hair, but the archer, standing on a cliffside, raining down arrows as you defend Helms Deep?

Well stop dreaming because now you can!

Continuing with our content series articles, this week’s multiplayer feature is QuiVR, a game that will have your shoulders screaming. Set in a fantasy world, QuiVR challenges you and up to 3 other friends to protect your keep from incoming trolls with nothing but a virtual bow, a quiver of arrows and whatever courage you can muster.

Archery is one of those things humans have been doing for so long it may very well be built into our genes at this point. And while so many VR experiences use it on some way or the other, one of the reasons QuiVR stands out amongst the crowd is because it is a dedicated archery game. Statistics on your shots are being kept, you’re forced to move around to get easier or more challenging shots at your enemies, and the game’s developers work hard to ensure that the feeling of the experience comes as close as possible to the real thing. Therefore, as you might imagine, QuiVR is big on accuracy, yet unlike actual archery, you have unlimited arrows and, as you customize your gear, special items with different magical abilities that enhance your offensive and defensive capabilities become available.

Normally, we recommend this title to groups of three or four. It’s a nice starter to VR, allowing new users to get accustomed to the controls and the understanding of how, in virtual reality, your body interacts with the virtual environment it’s immersed in. And although it was not designed with team building in mind, communication and role attribution can improve the overall performance of a team.

Get your archery skills ready and defend your keep with your coworkers!
Check out our Corporate Packages by clicking the button below in consideration for your next event:

As one of four archers, your goal is to defend the gate protecting your keep. As you and your team stack kills, you slowly power up the mechanisms required to close the next gate. As you keep pushing on, you close gate after gate, continuing until you lose two gates in succession. As archers, you will be focusing on shooting down the trolls coming at your gate, enjoying the challenge with your friends, family and/or coworkers, until you either lose the game or your arm gives way to the stress of holding the virtual bow for so long.

Of course, there’s room within the game for a more tactical approach and should you talk to each other, spread out, get flanks and focus on different targets, not only might you start to do well, you might even make it to the first event, which as of writing this is a massive worm reminiscent off the covers of Dune.

As communication roles and strategies are defined, QuiVR becomes a true team experience, one where magical abilities are timed and tied together, where tougher enemies will appear and be brought down even faster.

And while eventually even the best teams fail, success will be measured by the amount of progress after each failure, something that builds grit. And grit is something you can never have too much of.

Next week we’ll go flying in VR, and learn how, in a Rock-Paper-Scissors game, spears can beat machine guns in Run of Mydan. But for now, come enjoy the snow, shoot some arrows, fail, try again and git gud in more ways than one.