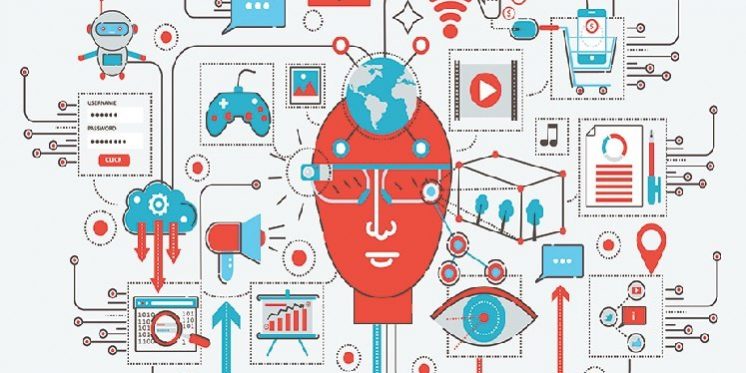 We’ve talked quite a bit about VR in this blog, naturally, but I want to shift gears today a bit and chat about AR or Augmented Reality. As software and hardware advances, new emerging technologies come out that will always push the envelope. To better understand where AR is going and what the future may hold, it will help to take a quick dive into the past to see where AR started.

Before we dive in, have you tried Virtual Reality yet?
Come to VRPlayin and escape into your choice of nearly 50 experiences!
BOOK NOW

Let’s start this journey in the late 1960’s (Really? That early? I know, right?). You may have heard a of gentleman by the name of Ivan Sutherland who was the first person to create an HMD or ‘Head Mounted Display’ which is the term that coins the products of today in which you wear a display over your eyes.

The device in the image above, was a pretty crude device to say the least, attached by wires to a computer the size of a bookshelf, and it only displayed simple wire frame drawings. But, in the late 1960’s this was absolutely revolutionary.

Fast-forward to 1990 when Tom Caudell, a Boeing Researcher aptly names his technology ‘Augmented Reality’ in an effort to save costs for the company. He and his colleague David Mizell were asked to come up with a solution for the high cost of production on large format schematics, which at the time were used to guide the workers on how to build and assemble planes. Their idea was to build a headset which projected the image onto a blank sheet of plywood rather than use massive, expensive machines and drawing guides which needed to be produced for every diagram and plane. It worked efficiently enough that Boeing still uses AR today to help build their airplanes, albeit the technology is a bit more sophisticated now.

Not too shortly after that, in 1992, Louis Rosenberg, above, builds a completely new device for the Air Force called Virtual Fixtures, in which an operator would stand in a full-body exoskeleton and as you moved in place it would move an empty exoskeleton at the same time. The headset showed a camera from the robot’s perspective so you could see the robot’s movement as if they were yours, while also displaying information through the lenses you were looking through. “This demonstrated for the first time, that a significant enhancement in human performance of real-world dexterous tasks could be achieved by providing immersive augmented reality overlays to users.” Wikipedia

It wasn’t until AR hit the entertainment scene that it really took off. The first time it was used majorly was in the NFL in 1998 when The 1st & Ten line computer system was broadcasted by a company called SportsVision, which drew the first yellow line across the field during a live game. In 1999, Naval researches began working on BARS (Battlefield Augmented Reality System), which was an early headset designed for soldiers. In the mid 2000’s there was a major leap in technology with ARToolkit brining AR support to Web browsers.

And that brings us to this decade, in which technology has jumped once again. In 2013, Volkswagen started using their MARTA (Mobile Augmented Reality Technical Assistance) to provide step-by-step instructions on how to build and repair cars. In 2014, Google shipped their Google Glass, beginning the ‘Wearable AR’ movement and a company called Magic Leap announced the biggest AR investment ever of $50 Million dollars. In 2015, AR investments reached $700 Million dollars a year and after the release of the Microsoft HoloLens DK and the Meta 2 DK in 2016, AR and VR investments reached $1.1 Billion.

Here we are in 2018 and Magic Leap, after years of secrecy, recently announced their product which is now shipping for over $2000. Since the expectations were set so incredibly high, there are a lot of mixed feelings after waiting 4 years for a product that seems to not deliver what it promised. However, the future is bright in the AR world and we are seeing apps like Pokemon Go (which implements small AR features into the game) develop and take over the world. Apple has fully embraced AR in their technology by creating ARKit and releasing it into the world for everyone to develop. As most things go, we will now see a big surge in advancement now that Apple is involved, at least on the mobile side anyway.

So that about wraps it up for today. What do you think about AR? Do you think it really is the future, and if so, what do you see for the best use case(s)?