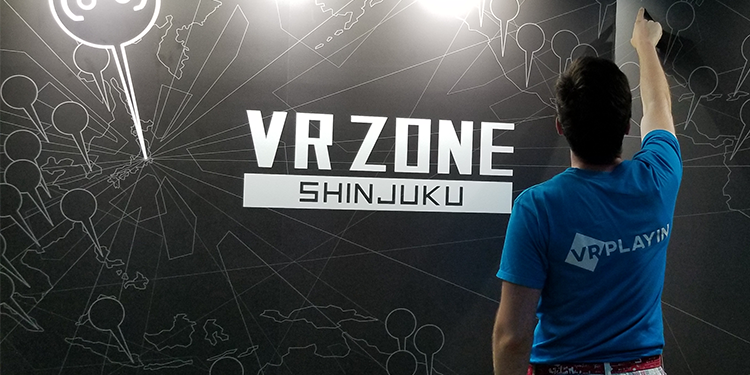 The VR jewel of Tokyo. The uniqueness of this space makes it entitled to its dedicated blog entry. As briefly mentioned in Part 1 VR ZONE is Bandai Namco’s vanguard in the realm of Virtual Reality.

To give some context, some of you may know Bandai Namco as the game publisher behind Divinity: Original Sin 2, Dark Souls, a plethora of DragonBall and Sword Art Online titles, as well as the TEKKEN 7 and the Project Cars (1&2)  the sole VR title supported on steam. But what you may not know but should go without saying is that beyond publishing, there is also a development studio. But what is more of a Japan only entity is Bandai Namco Amusement (rides). Similarly to Samsung in Korea or Google in the US, once companies go beyond a certain point they start to branch out into other markets within the territory they originated from. Samsung has banks and hospitals, Google is building its own little city, and providing solar power, Bandai being smaller extended into tangent fields. The Amusement side having a history making arcade machines.

As for the topic of today’s blog, the story starts in April 2016. A popup event called “VR ZONE Project i Can” is setup as a VR Entertainment Research Facility at DriverCity Tokyo Plaza until mid October. DriverCity being a grandiose Mall in a more touristic area with a large number of attractions and events happening in close proximity… such as the everpresent guardians of the front entrance.

I’ll go into more detail about DriverCity in Part 3 about Tyffonium and VirtualLink. But back to Project i Can, the 7 month long popup featured 6 experiences, with several machines dedicated for each one. I can only assume that it was to foreshadow the coming of VR ZONE Shinjuku, that opened up 8 months after. While the Japanese are highly effective people, I don’t think that the success of the popup pushed Bandai to invest into a long term venue, but that it was pre-planned and only alterations to that plan have occurred.

Fast forward July 2017, and VR ZONE Shinjuku opens its doors. Word of caution if you plan to visit, VR ZONE is in Kabukicho – a somewhat shady tourist trap due to it’s status of “entertainment and red-light district” of Shinjuku, fun was had regardless, and speaking the language helps get out of awkward conversations. Don’t accept tempting offers if you’re going alone at night, be cautions during the day.

Unfortunately I was not allowed to film within the venue. There is an expectation of privacy in Japan, despite being in public places and filmed by 10 security cameras.

VR ZONE tells an interesting story that many venues have gone through. VR ZONE is a full fledged arcade. As referenced in Part 1, A North America venue such as IMAX VR started by offering arcade services in an internet cafe setting. VR ZONE behaves like an arcade and feels like an arcade. The headset alone is an incomplete experience.

The story being “adapt or die” with a hint of “learn to let go”. At opening VR ZONE had its space separated into 4 areas, each with their own set of experiences. One could buy zone specific individual tickets, or they could buy a cheaper “pack” of 4 tickets, one for each zone. At the time of my visit though, the prices were the same as what my brother paid a year before (at least until April 2018), but my pack was no longer zone restrictive, despite being offered 4 tickets of 4 different colors. A small change, but it does show that as consumers of virtual experiences we don’t like to be boxed in when a larger selection is available.

Another interesting trend I’ve notice was the existence of a price of entry within the space, which was lower than a single ticket, said ticket offering you automatic access to the space.

Now the key difference between Playdium, for instance, and VR ZONE being the number of attendance present to help facilitate the VR experience, almost 1 for 2 headsets, with the odd exception.

Touching more on the Virtual experiences though, the space is set on 2 floors, with the majority of headsets being above, and a cafe, gift shop and sparse experiences on the bottom. 15 VR Experiences all in all. And of course almost all experiences require a headset. Almost all because there were some that did not. Of note though is the Dragon Quest Free Roam (backpack PC) VR experience on the 1st floor, that had you go on a fantasy quest with a choice of 3 classes. But due to fears of language barriers I decided to skip; DragonBall was Japanese only and I felt it took away from my ability to truly appreciate the experience.

With news of VR ZONE came the news of Mario Kart VR and DragonBallZ VR… Yes, despite me not looking like it, much fun was had. It’s something about screaming at rides that I don’t get. The experience was not voice activated. It’s my fellow teammates that kept screaming the ka-me-ha-me-ha! I swear.

From a technical standpoint the trackers on my hand were hard to keep facing forward to to the geometry of my hand and it just being difficult to keep your palm flush forward… especially when you’re doing Full Force air slaps towards targets on the opposite side of the courtyard or a flying opponent. Floor rumbling and wind blew me away though, pun intended. If the head strap wasn’t clamping my hair down it would have made for a nice effect.

As for Mario Kart… lot of fun as well, I’m not saying that just because I got 1st place, but while I was in the experience the fact that tracker band was destroying my hand was not noticed, longer exposure may have resulted in a purple thumb. I was surprised by their request to take my watch off, but I am inclined to believe that people, not seeing their hands, have smacked them on the steering wheel enough times to warren this request.

While the track was not something akin to Dirt and the “kart” was something custom and not a VRX dedicated motion sim, the ride was responsive enough to the deliberate bumps in the road, the one shell that got me, and Wario and Bowser (AI) viciously bumping into me throughout the course. I regret not going for double hammer and driving with my knees… next time.

The least thing I tried was the Omega Hospital Escape, and yeah, it’s virtual, and scary. It got me tensed up. Similarly to Mario Kart, there was forward motion, but slow, and in a wheelchair with things hunting you, and jumping at you… fun. A 4 player experience that is different for each as you get separated and reunited from time to time, with some level of dependency and cooperation. Individual failure is group failure.

Something that we’ve been doing before VR ZONE opened its doors was to get people to experience the magic of virtual reality together. Be it fantasy quests, escape rooms or some friendly competition, we got something for everyone, and for everyone to play together! Check out our events and group options!

3 experiences had a line when I went there at 1pm on a Wednesday. Everything else was dead, DBZ included which was fine by me. But by the time I was leaving a steady stream of people was making its way in. Say from 20 people to 100+ headsets to 50 people to 100+ headsets. I dare to imagine a busy weekend, and as someone working in a similar space, it’s a nice mental image but as someone who’s been to and worked at Canada’s Wonderland… I have respect for the staff.

See you next week where we’ll talk about startups and interesting pairings.