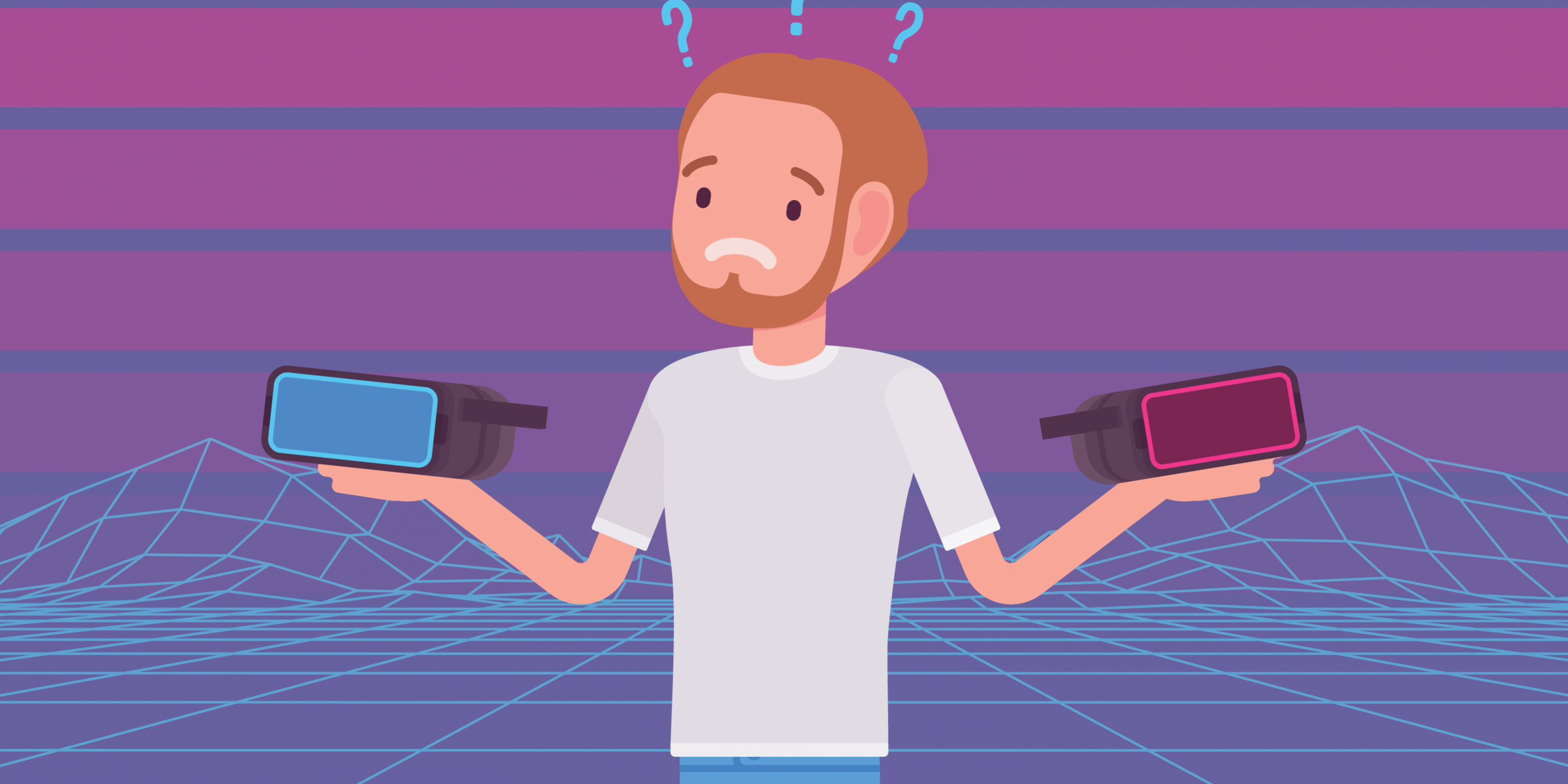 Do you guys remember The Matrix? One of the things that really stood out to me was the chair Neo sat in for “training”. Do you remember that?

I like to believe that this is where VR is headed. And I’m not just saying that because I want to learn kung fu. But while Neo’s chair is cool, is attached to an airship with anti-gravity modules and looks expensive, let’s face it, we still have some ways to go.


Truth is, until we’re all in spaceships or the Matrix, whichever comes first, when it comes to the best Virtual Reality currently offers your headset has to be attached to a PC. So to help you get some clarity on where VR currently is, here are the 5 key features you should look at when comparing headsets.

Before we jump into it though, consider jumping into an HTC VIVE at VRPlayin and take your pick between 50+ Virtual Reality experiences:
BOOK NOW

If you’re remotely familiar with the discussions surrounding VR, one of the key topics is resolution, and the dreaded “screen door effect”. If you’ve ever looked at your phone through a magnifying glass, where if you looked so closely you could see between the pixels, you have a sense of the problem that sometimes plagues VR. Resolution tells you how many pixels tall and how many pixels wide something is. For instance my 20’ monitor has an native resolution of 1080 x 1920 while my second “monitor”, a 32’ flat screen TV has a native resolution of 720 x 1280 and my phone tops both at 1080 x 2220. You get the idea. But resolution is not enough. Pixel density is also a very important factor, especially when it comes to VR. To give you some numbers when it comes to resolution:

Another important aspect of headsets to consider is how much you can see at an angle. The term ‘field of view’ (FoV) may be familiar to some of you who’ve played Minecraft or Quake or other games. It indicates how much you can see around you without moving your eyes. In traditional games like Minecraft, changing the FoV to a larger value will distort the image you see on your screen and changes the way you look at what’s in front of you.

When it comes to the human body, our natural FoV is 220’ (360’ would imply being able to see behind us). Of course we do not use 220 when working or playing and the body has less understanding of things happening at the edge of our vision as opposed to the centre of it.

In VR though, capitalizing on the fact that we don’t need our full field of view to interact with the (virtual) world, developers worked with more manageable numbers, revolving around 100’. Such a low FoV results in the world being black at the edges. But as someone who has worn thick framed glasses for almost a decade and plays games in the middle of the night with the lights turned off, a low FoV in VR seems normal.

But here are the numbers:

Tracking is a very important thing to consider when deciding on a headset. Based on the nature of activity and space you will be using the headset in, you may have stronger reasons to choose a headset that tracks better than another.

The 3 major tracking methods are as follows:

Here is how the headsets mentioned earlier manage tracking:

As mentioned at the beginning of this article, you need to connect your device to a machine strong enough to be able to run it. While each manufacturer will have their own minimum and recommended specs, a complete list which you can find in the link at the end of the article, there seems to be a consensus on the Graphic cards (GPU) and Processors (CPU) needed. You will need a minimum:

Older generation CPUs will work, but they will need to be in the upper ends. To paraphrase Microsoft: “requirements may vary depending on the content or application you are running”

Finally there is the cost of the device. Of course different features, as well as the market position, will impact the price of the headsets, but with next generation headsets coming out in 2018, the price for entry has been significantly dropped, while the new features are not always worth the added cost, especially for those considering getting their 1st VR system.

So the much anticipated price data (in USD):

Hopefully this helps if you are looking into getting your own VR system at home. To access the sheet with all the specs, features and prices you can go here.

EDIT 15OCT2018: Since the images with prices have been added, the sheet has been updated to better reflect the state of available and upcoming hardware.