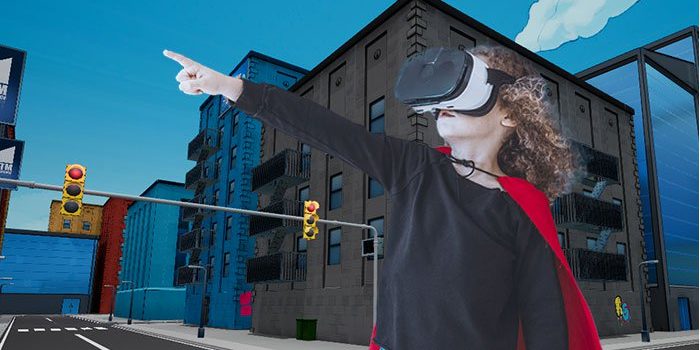 There’s nothing like having kids to show you just how unsafe the world can be. Whether it’s playing in a park or walking busy streets, there’s almost something around every corner, a truth highlighted even further when you’re trying to find an activity for your kids birthday where you don’t have to worry about their safety. But while the real world can be a dangerous place, one of the amazing benefits of VR for kids is that virtual environments can contain all the fun of exploring and learning without the physical hazards all parents worry about.

As any parent knows, kids tend to be extremely curious. They’re in a constant search of new information about their world and tend to push the limits imposed upon them through exploration and understanding. Just like us all they require affirmation and support, things they gain often through play, where they also learn to negotiate rules and to appreciate the wants and needs of others.

So, taking all this into consideration, here are 4 key reasons why we think virtual reality is a great idea for a kids birthday party:

A child’s’ mind is a sponge that will absorb any new medium (think of the first time they got their hands on a smartphone). Well, virtual and augmented reality is the next smartphone, the next medium of communication and interaction. With the gap between real and virtual slowly closing, introducing this new technology to your kids now will give you control over exposure and growth to a new form, one that will eventually become an everyday thing as the equipment becomes lighter, cheaper and more portable.

And when we say fun, it’s going to be lots and lots of fun! Kids use their imagination to be the heroes of their own stories. Maybe they put on cardboard armour, or build forts out of pillows, or have all red carpets in the house be lava. Or was that just me? What virtual reality allows the kid in all of us to do is to live those experiences out. It allows you to team up with friends and go on a fantasy quest to find long lost treasure, or defeat an army of robots.

The possibilities are literally endless, bound only by the creators time to manifest their imaginations and the user’s curiosity and willingness to explore. What makes virtual reality so amazing is the fact that it allows for a lot of people to experience the same thing at once, together. VR consolidates the collective imagination into a coherent story that everyone can follow, and in some cases, make their own version of it.

A birthday party in virtual reality is not just a safer alternative to actual paintball (there is virtual paintball), but also to trampolines or simply running around in the park. Any provider of virtual reality experiences will still give you plenty of room to move around. Some may even have padded walls but all will have trained and knowledgeable staff that know the experiences inside out to be able to help users navigate through the virtual choices they’ve made.

A lot of people new to VR bring with them preconceived notions that concern the technology’s impact on the health of the user. Here are the 4 of main areas of concern we see when dealing with those new to VR:

I will write an article expanding on this topic within the next few weeks, so make sure to subscribe to our blog’s newsletter at the top of this page.

Either way, if you’re thinking of having a VR birthday party for your child, consider going through our content catalog to see what titles are available out there and what to expect when kids will be in them. Equally, you can find one of my past articles where I describe all our multiplayer games here.

And when you do decide to throw a birthday party let us know and we can give you a dedicated space for cake cutting in our party room! Check out our Birthday Packages by clicking the button below and see everything VRPlayin can offer to make your next party a success!