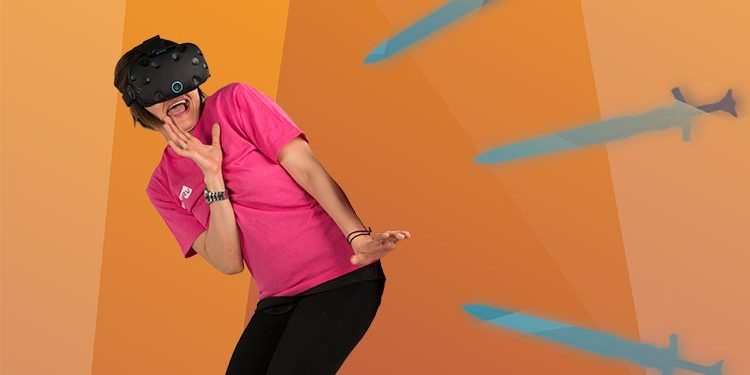 A few weeks back I wrote a blog post about how VR is great for kids birthday parties, and as promised this post will expand on the topic of health risks. CNN recently released an article of their own touching on the matter, with a bleaker outlook that does not seem to take into account the way we behave outside of research environments. That being said here is the perspective of someone who owns an HTC VIVE and whose job is to take people in and out of virtual reality.

This makes sense if you have one at home in a cluttered space. But the virtual space that you move around in has a boundary that you have to pre-define. And it is ultimately the user’s responsibility to stay within that boundary, clear the space before putting on the headset, and ensure that pets can’t or won’t walk at your feet. It is also recommended that you have someone with you to ensure your safety and warn you of any potential hazards, but again, if your space is pre-defined with enough room to the bookshelf; you’ve moved all the legos into a corner of the room, not within your space, and have closed the door so the cat won’t come in for you to step on it; you are good to go.
Yet to minimise this further, virtual reality arcades or experience centers have larger spaces than one would have at home and/or have padded walls to ensure that people don’t hurt themselves while fighting the virtual enemies.

As mentioned in my previous article, it’s not a thing unless you want it to be. Content is made in such a way that the primary way of moving around is teleportation, in most experiences. This completely eliminates motion sickness. And we have noticed that for things like driving and flying simulators it is the adults that get motion sickness, not the kids. Coincidently, having worked with people who suffer from motion sickness in virtual reality, we have noticed their condition improving as time went by; being able to be comfortable in most experiences that previously caused them motion sickness. The driving simulator on the other hand is something requires more practice and patience. This also ties in to research done on the topic of phobias and PTSD treatment with the use of virtual reality, through something called exposure therapy.

Also not a thing. Like staring at a computer screen or your phone, we blink less and that results in eye fatigue and and possible headaches… and that is why breaks are encouraged. Like with all things, moderation is key. But when it comes to the eyes, concerns are raised more so about the possible long- term damages. One thing to note is that while staring at your phone or monitor you are focusing on a single flat plane, which in the case of the phone, or a book heald to close to the face, can result in a horizontal elongation of the eye that in turn can result in myopia. But when wearing a VR headset the objects you are looking at, despite being displayed in a screen inches away from your eyes, can seem very far away; and your eyes are tricked to constantly shift focus on the objects that are closer or farther away — something called vergence-accommodation coupling. When discussing the issues of lasting effects on the matter, the same Dr. Banks from UC Berkeley quoted by CNN said the following to in an article on VentureBeat:
“Those couplings are fairly plastic. You can learn to change those relationships. The one you have naturally, I think you’ll just go back to that when you take the headset off and look around the room and give your eyes a second to adjust.”
This is also something we have noticed with our recurring guests and staff: the more you switch between real and virtual the easier the switch becomes.
Lastly on the topic of eye strain here is another quote from Dr. Banks:
“I don’t think there’s a smoking gun out there, but what we don’t know is long-term use — let’s say 12 hours a day — would that have any long-term effect? I doubt it, but I can’t prove that to you scientifically.”

Yes, this is a thing. As mentioned prior, age plays an important role when deciding if you want your child to have a VR headset on their head for whatever length of time, at home, school or in an entertainment venue. The simple physiological thing to consider is the fact that kids have smaller heads, and the system was designed for adults. With that in mind, the equipment can be oversized and heavy. We have observed that the headsets droop over the nose bridge of kids when the headset is not firmly strapped to their heads, and the weight of it forces them to hold it up with another hand… also taking away from the experience. In addition because we are dealing with a lot of buttons with shifting functions and gesture based interactions, we find that the age of the user is paramount when it comes to understanding the levels of abstraction that these systems work with. Manufacturers have set a soft limit of 12-13 years for the high-end PC and console VR systems. As an experience center with staff constantly monitoring our guests, we have a hard limit of 8 as our staff will take the time to guide kids through the processes and interactions; but if you get one at home it is highly recommended that you monitor and moderate use of VR by kids until you have certainty that they fully understand the limits of the virtual space and the nature of things they are allowed to do in it.

Virtual reality is not all games, and due to the immersive nature of some of the content it is important what people experience, yes. Going in the experiences aimed at kids, the worlds are generally so unreal that the distinction between real and fictional will always be clear, and there is no risk of bringing the violence from something like SuperHot VR to the real world, even if you let your kids play it.
Like with all things, there is the potential of leaving lasting impressions in the brain, and research has shown the good and the bad on how VR can help with phobias as well as manipulate children. But those are experiences created to serve that role within research environments. And that is why it is important that people who use VR are mature enough to understand that what they are experiencing is not real, even if the visuals are realistic. In general, most concerns about behavioral change due to VR exposure stems from the old, and debunked, claims that video games make kids violent and pornography makes sexual predators. There is a reason games have a rating system. And with enough time to mature as an industry VR will have something similar.

Did you know VRPlayin has Birthday Party Packages? Check out our play package options by clicking the button below and see what we can offer you to make your next party a success!

I hope this was an informative journey, and has helped you look at VR with a more critical eye, especially when it comes to the age of your child and the content you wish to expose them to; but you, dear reader, should have no problem jumping in.