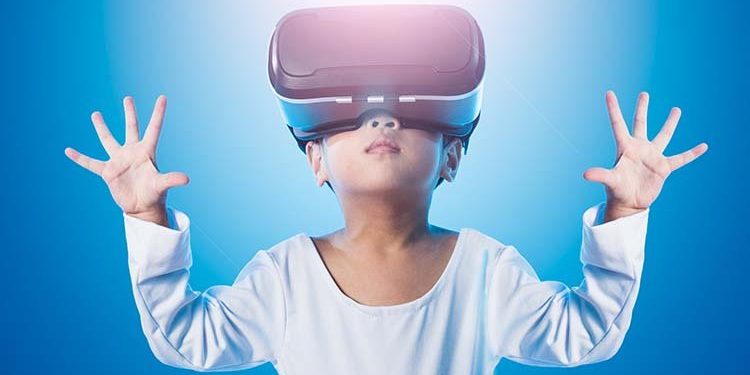 From salt to fat, from exercise to sleep, anything and everything can be bad if done in excess. Eat too much ice-cream and you’ll get sick, too much candy and your teeth will fall out. In a previous article we talked about the health concerns in regards to Virtual Reality but today we’re going to focus more on kids and how virtual reality works for them.

Yes, age is something that needs to be considered when deciding if you want your child to have a VR headset on of if you are considering getting one at home for them. While manufacturers such as HTC (VIVE) and Facebook (Oculus Rift) put 8 and 13 as their suggested respective age restrictions, these ages have less to do with clinical research and more to do with biological realities. For the most part, kids have smaller heads, and because the system was designed for adults, the equipment can be oversized and heavy. With a smaller head, the distance between pupils is considerably smaller than that of adults but because we are dealing with a lot of buttons with shifting functions from experience to experience, we find that kids age 8 and up have a better capacity of understanding the level of abstraction that the controllers possess. That is not to say that a fast learning 8-year-old can’t out perform a slower 15-year-old, but on average this is the case.

As staff constantly at our experience center, we take the time to guide kids through all of the processes and interactions; but if you get a VR setup at home it is highly recommended that you monitor and moderate its use by kids until you have certainty that they fully understand the limits of the virtual space and the nature of things they are allowed to do within it.

On the topic of age, we have an upcoming summer day camp for kids 10 to 12 where we use the power of VR to cultivate both hard and soft skills, with plenty of alternation to real world time activities to practice what was learned. Register now by clicking the button below!!

One of the major concerns people have had with VR since its early days is motion sickness. To read more about the cause of motion sickness and how it is associated with VR, you can read our previous blog post here.

Interestingly enough, kids are less prone to motion sickness when it comes to VR. As of this writing we’ve had close to 3000 minors in our venue, and most of them have played at least one flying, jumping, or driving game and have been affected less with respect to motion sickness than adults. The reason for this is a lack of ingrained experience. Adults have been in cars as drivers and passengers for enough time that our brains have been wired to expect certain cues in response to specific actions. Inertia tells us if we are turning, slowing down or accelerating and our inner ear confirms what we’re seeing, telling our brain that we are turning, be it in a car, plane or boat. This is coupled with sounds we are familiar with, like the rev of an engine, the screech of brakes. Kids don’t have the same experience. For them, they can be in a virtual car going 300km/h without an issue, slam it into a wall at full speed, laugh it off and then resume the course.

To compensate for the risk of motion sickness, most experiences have been design with mechanisms that avoid having the user exposed to the risk. These mechanisms include making the experience sufficient in the space the headset wearer is moving in or giving the user the ability to teleport around the virtual space instantaneously. Teleportation, by it’s “blink and now you’re there” system, saves the brain from experiencing being pulled from point A to point B without registering the sensation of it. Teleportation is like an elevator that you don’t feel moving: you press a button and the doors close, the next moment you’re on a different floor, without a sickening sensation of falling or being pulled up.

While claims have been made and disproven that video games make kids violent, it is important to note that Virtual Reality is not all gaming. But due to the immersive nature of some of the content, it is important to understand that things can seem real. Placing those afraid of spiders, for instance, in a box full of virtual spiders may not be a great idea.

Yet for experiences aimed at kids, the worlds are generally so unreal that the distinction between real and fictional is almost always clear and there is no risk of bringing the violence from something like SuperHot VR to the real world, even if you let your kids play it.

In an isolated case, one researcher chose to stay 24 hours in VR. After 17 he could no longer distinguish what was real and what was virtual. That feeling subsided but I’m leaving this here as an example of to much virtual ice cream. I’ve personally used VR for work, for physiotherapy when I’ve had shoulder problems, and have participated in a 3h conference with people from around the world. All the while others have used it to make art, or to educate themselves and others, all while still being able to tell the difference between what’s real and what’s virtual.

Like staring at a computer screen or your phone, while in VR we blink less, something that results in eye fatigue and and possible headaches. But like with all things, moderation is key and when it comes to the eyes, taking breaks is important. Other concerns raised are more about the possible long-term damages. One thing to note is that while staring at your phone or monitor, you are focusing on a single flat plane, which in the case of the phone, or a book held to close to the face, can result in a horizontal elongation of the eye that in turn can result in myopia. But when wearing a VR headset, the objects you are looking at, despite being displayed on a screen only inches away from your eyes can seem very far away. This tricks your eyes to constantly shift focus on the objects that are closer or farther away, something called vergence-accommodation coupling. When discussing the issues of lasting effects on the matter, the same Dr. Banks from UC Berkeley quoted by CNN said the following to in an article on VentureBeat:

“Those couplings are fairly plastic. You can learn to change those relationships. The one you have naturally, I think you’ll just go back to that when you take the headset off and look around the room and give your eyes a second to adjust.”

This is also something we have noticed with our recurring guests and staff. The more you switch between real and virtual, the easier the switch becomes.

Lastly on the topic of eye strain here is another quote from Dr. Banks:

“I don’t think there’s a smoking gun out there, but what we don’t know is long-term use — let’s say 12 hours a day — would that have any long-term effect? I doubt it, but I can’t prove that to you scientifically.”

A reasonable concern to have about VR would be if you have one a system at home in a cluttered space. Although the virtual space you move around in has a boundary that you can pre-define, you may have to declutter your physical space beforehand.

Yet before you dismiss the technology consider the following:

Kids may not know the theory or science behind new digital technologies, but they learn and understand technology faster and better than adults over 40. The booming of internet, broadband, and smart devices since early 2000s has created a generation of digital natives. Kids of this generation haven’t seen rotary phones, dial-up internet, or giant cassette players and are learning how to swipe through smartphones and tablets before they are able to talk. As a result, kids typically find new digital technologies more attractive and are more easily adaptable to them than adults do.

While this demand is a constant in the tech world, VR is having an impact on almost every industry and as VR’s influence grows, companies will start needing more than just engineers and programmers. The future of healthcare and education are already relying on certain VR applications, while real estate and architecture have introduced the technology.

Like any new technology, from microwaved food to the use of cellphones and the or even airplanes it is more reasonable to have concerns about possible health risks, especially when it comes to children. But to paraphrase someone dear:

“The world is full of perils and arrows fall from the sky each second, any of them could take my boy away, all I can do is to prepare the him for what the world will throw at him now and in the future.”