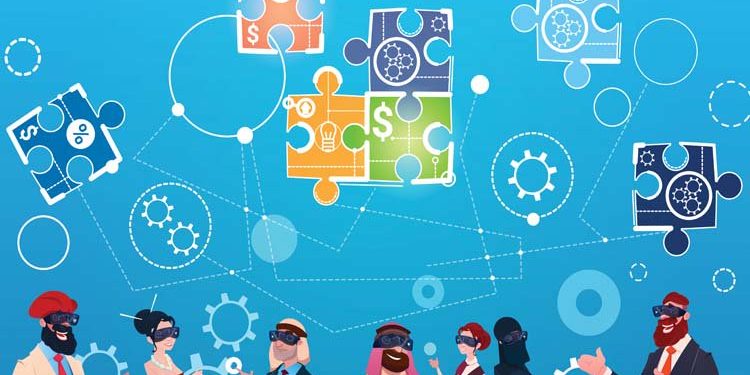 I know we’ve written many articles in the past promoting Virtual Reality as a team building activity. But for those of you who are still on the fence about trying VR for your next corporate event, let’s go into detail on some of the successful team building examples I’ve witnessed while working at VRPlayin.

Since its opening in April of 2017, VRPlayin has hosted over 100 corporate events of all shapes and sizes. And by shapes and sizes and I mean numerous types of industries and various age ranges and group sizes. No matter how big, small, young or old your team is, we feel it’s safe to say you can have an amazing experience in Virtual Reality together.

Let’s take the game Rec Room as an example. There are Quest modes that almost require so much team building that it’s unforgiving (but in a fun way, I promise). I can use myself for this example. We once had a VRPlayin staff party where we became so committed to beating the Quest for the Golden Trophy that we basically spent the entire time in VR communicating (sometimes yelling) to each other in attempt to hash out a plan to win. Full disclosure: We did not beat it in the end. But I did learn a lot about my new coworkers and had a LOT of fun while doing so.

The Quests in Rec Room demand communication. Because of the lack of checkpoints, upon death you are forced to start from the beginning again. This seems unfair but in reality it forces you to try even harder the next time, and then again the next time. You quickly learn what your teammates strengths are – perhaps Bob is quite impressive with a bow and arrow whereas Cindy can wield a mighty sword. Upon gathering this information, use it to execute your master plan together in an attempt to beat your opponents and make it to the end for that Golden Trophy. Even if you fail, I guarantee you’ll go out busting a gut laughing together.

Another great example is the zombie apocalypse favourite Arizona Sunshine. In Horde Mode, 4 team members work together to stave off impending hordes of zombies with limited ammo and health resources. As the waves progress, the key link to survival is mapping out a plan with your team members in order to stay alive. After dying quickly the first couple of tries (trust me, this will happen) you soon learn what each member can contribute to have the longest chance of survival. Sydney is going to watch the West side while Matt flanks her, covering all the zombies coming in from the East. Melissa and Tom will watch the North and South, while also keeping watch on ammo consumption, making sure everyone has enough bullets to watch everyone’s back.

Between screaming from the jump-scares and yelling commands at your teammates, you’ll find yourself pushing to work together and survive, as even in VR games, the will to live is strong.

But let’s take a step back and forget about fantasy quests and zombies for a second. One of my favourite things to witness is the good ol’ one-on-one round of VR table tennis with that one colleague you might have a bit of tension with. The first round is all fun and games, one of them wins and there are no hard feelings. But then, after a couple of beers, they decide to do a best of three, which soon results in vigorous arm flailing and sweating. Thanks to TV’s setup in every VR booth, the rest of the coworkers can look in on the action, and perhaps pick a side to cheer for if they dare. You may come out of this experience with your work clothes drenched in sweat, but it will definitely result in a ‘good game’ handshake and some great stories to take back to the office.

In conclusion, I’ve learnt that if anything, team building in VR ends up with some sweating, some fierce competitiveness, and lots and lots of laughter. So, what are you waiting for? Have I convinced you yet? Check out our corporate events page by clicking above and come try team building in a virtual world with your colleagues!

The Ultimate Guide to Team Building in Toronto
April 24, 2018