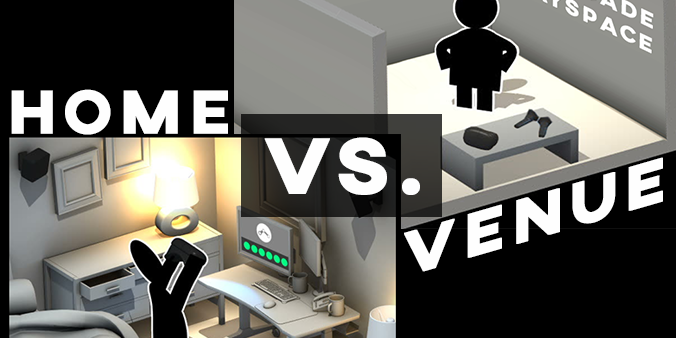 The age-old debate: cook at home or go out to eat… Spend a dismal amount of time researching a recipe and getting the ingredients only to go home to realize you’re missing a key piece of equipment or the kitchen is being used by someone else. Alternatively, you could go to your corner franchise restaurant and order your choice meal that they get right every single time. Save time, pay more… maybe.

In line with the above analogy, this post will explore some of the differences between cooking stepping into Virtual Reality at home or going out to explore the wonders of VR.

When it comes down to ingredients, I’ve highlighted the differences in specs, requirements and prices of the various VR headsets currently on the market in a previous post found here. What that spreadsheet is missing, however, is the added cost of the PC needed to run the headset. I’m talking about the higher end stuff here, like the HTC VIVE, Oculus Rift and the Windows “Mixed Reality” (bad branding) headsets.
A PC strong enough to run the base hardware will cost you around $1,500 CAD for a desktop. But if you want to run titles in the upper tiers like Fallout 4 VR, Skyrim VR, ONWARD, RAW DATA, Arizona Sunshine, etc., you will need to spend a lot more – especially if you plan on getting a laptop. So with that in mind, you’d be looking at something close to $2,000 – $2,500 CAD for the desktop and anywhere between $3,000 and $4,000 for a laptop.

Now, if you have the money to throw at VR (and as someone who has it at home and uses it), I can say that you wouldn’t be throwing it away, but you may end up using it far less than you originally imagined.

As for your ‘kitchen’, you will need room to use your equipment. If you spend close to $3,000 CAD on a full system (excluding the PSVR) it would be a waste if you only use it sitting in front of your desk. If you buy a 6DoF system that allows you to move around a 3D space, pick things off the floor and throw them, you should do that, or at least give yourself the option to! That’s why you need one of those cooking show kitchens – lots of space for you to move around, a little stroll from the virtual stove to virtual fridge.

Granted, you could just as well setup for a standing experience where you just turn and teleport around. But don’t give yourself an excuse to skip leg day as walking adds to the immersion, even if it’s 4-5 steps from corner to corner.

The VIVE for instance requires a minimum of 2m by 1.5m to function in a “room scale” setting. And while that may not be enough to fit a dining table, you will still enjoy the walking.

Speaking of that dining table, dining is something preferably done with other people (or a pet at the  very least), VR at home is for you – the one person, with the exception of some titles that permit a form of asymmetrical interactions with people outside of VR. Some good examples of this would be “Keep Talking and Nobody Explodes” and “Mass Exodus” which are both great party games, only downside to Mass Exodus being that you need up to 4 Xbox controllers and a USB adapter so your dinner companions can can take a bite of the scrumptious world of VR, despite being outside of it.

So hopefully you now have a stylized idea of what VR at home would look like if it were a kitchen, per-say. Now let’s look at the restaurant experience.

When it comes to a restaurant, all the cooking happens behind the scenes. In retrospect this is great because you don’t have a mess to to clean up after…. Damn dirty dishes and Lego pieces controllers left on the floor. But unlike at home where you are the master and can cook whatever you want, restaurants serve you from a menu of commercially licensed titles, and they sometimes give you some bread sticks on the house if you ask for it after your meal. Seriously, you gotta ask for it.

A VR ‘restaurant’ is an all-you-can-eat buffet though, where you can choose whatever you want for the duration of your visit. The tables are always clean, and staff will help you with your choice of meal – be it a shooter, an adventure game or something more arts based like painting and sculpting. Most places will also have a variety of choices from bloody steaks to vegan and even paleo or gluten-free.

And like those fancy dinners at home, rarely do you go to the restaurant alone. The same is true for Virtual Reality, where dining with friends is at it’s finest. At home you would share the same bowl of popcorn and everyone would dive in haphazardly and make a mess, whereas the alternative gives everyone their own plat to indulge in whatever their heart desires. Plus, if you and your companions want to eat the same thing, enjoy the rich flavors of going into battle together, slaying your enemies and bringing glory to the kingdom, than is something you can do together. Being in VR with friends, all at the same time, can be a magical thing… trust me, I’m somewhat of an expert on the matter and all my virtually magical friends agree.

So if you’re up for some fine dining with a couple of friends, reserve your table(s) today, and experience the mind blowing worlds Virtual Reality has to offer!
BOOK NOW

As for the the unasked question: how much does it cost? The answer is: you get what you pay for. At a restaurant (and I’m not talking McD’s), can get you anywhere from $20 per head to a few hundred if you you’re going for crocodile steak, plus the gratuities. Similarly, at a Club Night, there is a $10-$30 charge for entry and then the drinks or bottle service on top of that. Even if you pre-drink, that’s saving, but it’s still a cost. When it comes to VR, in Toronto, you are looking at anywhere from $10 to $70 for a VR session, and a session can also vary in length from 10 minutes to 1 full hour.

So if you go at the midpoint for the arcade, around $30 – $35, that close to a $3,000 setup at home that can get you close to 100 hours of VR at a restaurant arcade/experience_center/lounge.

So consider how long will it take you to realistically spend those 100 hours with a device strapped to your face, and think if the tech will be cheaper and better by the halfway point – is it still worth it at home? Yet maybe you’re passionate and get one at home only to end up living and working in it. I do sometimes, it’s worth it for me. But if you just want a night out with friends every now and again, to do something cool together and be taken care of, then treat yourself to a nice restaurant 😉