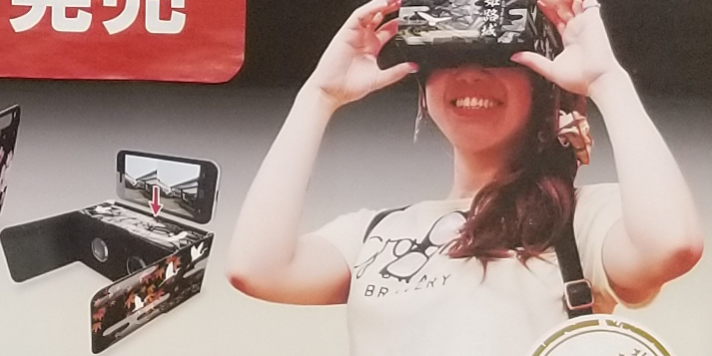 This one is dedicated to those of you who are more into marketing, but even if that may not be your cup of tea, it may still expand your view of VR and how it can be used. And of course if fun is what you’re after everything below revolves around fun things that get you thinking about the technology and the context in which you’ve used it.

But before we delve deeper, and you don’t know what you’re delving into, here are the past 3 articles in the series, and I recommend going through Part 1 – Overview if nothing else. Part 2 – VR Zone and Part 3 – The Underdogs have to with venues, and the upcoming Part 5 will also address the ‘VR Arcades’ (nothing the likes available in North America to my knowledge).

VR for Promotional Use

To better understand what I’m talking about think of those cool Nike holograms at Sports Check or the pop-up event where there’s someone with a headset calling you to experience Tahiti, or play a fun game in regards to a product, thus giving you a better understanding of its features or or burning the brand name into your skull.

Something in the lines of:

VRPlayin is present at a venue or event.

Staff with bold statements: VRPlayin is number one VR in Toronto!(citation needed)

Ideal Effect: You now consider bringing your Friends, Family, Office Party, Pets, Dentist and imaginary friends to VRPlayin so they can be in the virtual world with you! Share the fun with multiplayer titles where you can show off your skills to the point where you will not talk to each other for weeks or months to come! Until the re-match… fun!

Basically this is what happened to me in Japan, luck would have it though that I already owned a Samsung Galaxy S8 and was reasonably happy with it, despite having my mind blown by the Galaxy S9 that the pop-up space was promoting. (I think there was one in Toronto as well, but not the same scale.)

What you have above folks is a 5 level gallery with an attached  4D “cinema” dedicated to the various features of a phone. While there was everything from Slow-Motion video to Bixsby and (non-VR) peripherals. A whole floor was dedicated to VR fun, and the basement level used additional tracking technology to create a 2 player soccer game where players would take turns shooting and defending. With the added exterior sensors, and markers on the feet, gloves and headset, room scale motion was possible, and needless to say I was impressed that they’ve managed to pull room scale multiplayer with a mobile phone.

Yet on the top level, past the complementary cocktail that required visiting fun and phone feature related educational experiences, were 3 experiences that I regret not being able to try them all.

The other 2 experiences being a snowboarding experience as well as what seemed to be a sort of seated flying  experience that flipped you upside down.

And lastly, there was the 8 min buggy ride that utilised the controller to allow the player to shoot possible obstacles. With everyone’s scores being aggregated at the end for bragging rights.

Of course with the plethora of VR experiences Samsung wishes to get people buying the GearVR peripheral that allows for some similar experiences, although personally I stick to Netflix in VR.

But one thing VR does to the new Samsung flagship phone is provide Added Value to the device. That now allows you to load custom applications to add more value to your products and services, and Japan provided 2 examples of such use.

First off, Himeji Castle, the UNESCO cultural heritage site, uses both AR and VR. As the castle’s primary function was a defensive “in case things happen” type of structure, it was primarily empty. To make up for it, the AR app provided, at specific places, videos and images of how defensive structures were used.

As for the VR component, shortly after entering the castle’s outer grounds, I was greeted by this sign, notifying me that i can buy a cardboard headset in order to get an aerial view of the castle. Although it was trying to sell me more on the novelty of VR then on the quality of the imagery provided, it is a good start point.

This was a truly serendipitous find. Walking along the streets of Ginza, Tokyo’s high end shopping area, and crying over all the nice things beyond my budget, my attention was drawn to a Nissan showroom that featured one of their concept cars, the IMx Kuro (black) and also the building itself looked particularly inviting.

Now on the 2nd floor they had the GT-R Nismo as well as their gran turismo concept car for 2020. I’m not a car guy, but damn, those were some good looking cars I cannot afford and are not on the market yet.

Ok, VR, next to the GT-R there was a little platform with an Oculus setup with a motion chair and a steering wheel with a few buttons and force feedback. As the Nismo is a high power sports car. The VR environment gave you a choices between 2 settings, street and race, and once you’ve made your decision it would put you in the car with a professional driver in a 360 video. Such a letdown… but despite it all given the added moving chair and feedback in the wheel, as well as the pilot’s commentary the experience was an enjoyable one, and it was completely self serve, which I found troubling in terms of hygiene but it was later revealed to me by staff and badly position signs that cleaning products were available but in a drawer out of view.

But despite the badly position signs, Nissan made use of VR to promote one of their products and add value to the showroom at the same time.

That’s it for this one. Thank you for reading and see you in the virtual!