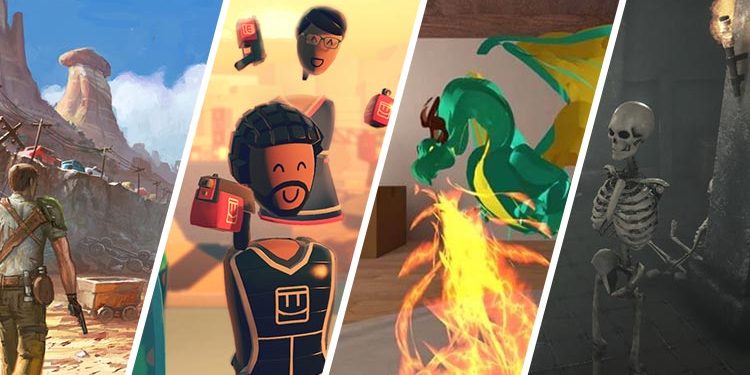 Play Charades! Is there anything better than that? I think not!

But on the slightly more serious side, one of the best things that made video games great was the fact that you could play with friends. There was a reason why the consoles of old came with 2 controllers connected to it.

As the technology evolved and things became cheaper, we each ended up with our own desktop PCs or a console in our living room. We began distancing ourselves from each other and started to become more connected online. Some of you more techie people may remember LAN parties that came as a result of people with PCs still wanting to be in the same room together and play the games they loved (and maybe eat pizza).

But now with VR, the cycle begins anew. Unlike the consoles, VR is an isolating experience, but like a PC, it isolates through how many people can use it at any time. Yet also like a PC, when connected to the Virtual Worlds you can connect with other people from around the world, across the street or the room. And unlike a PC or a console, the interactions you can perform and the level of immersion is greater than both computer and console combined.

Unfortunately, the technology is still expensive, and even if you have one at home there is a strong possibility that the people you want to be in VR with either lack the resources to get a powerful enough computer and the VR headset, or they may lack the space to set it up in their house. Yet that is no reason for you and your friends or team to not take advantage of these worlds. Enter the Virtual Reality venue: from the Arcade to the Lounge to us, the Experience Center. We make this distinction because the arcade is what it sounds – you pay for the experience, which runs for a limited time, or until you lose all your lives. Yes, it’s fun. But if you’ve never been in VR before, you’ll spend time on learning curves. Whereas a lounge or an experience center will have a significantly larger catalog where after one tutorial you’re good to go, be it on a mission to shoot robots, play some virtual sports or travel the world.

So, taking all this into account, here are the 4 awesome social things you can get in VR right now! Did I mention charades?

Although, if the thought of charades has already got you hooked on the idea of VR for your next outing, check out our Corporate Event page!

Few things makes a group talking the way a zombie game does. Be it screams of horror of the coming horde and the lack of ammo, or telling your fellow survivor (aka your teammates) that there is zombie crawling behind them about to munch on their ankles! Arizona Sunshine by Vertigo Games excels at getting people to collaborate through their well thought out environments. Each location challenges teams of 4 players to find ways of surviving the apocalypse, and in doing so people will naturally communicate their status and open up to what they are doing and where the threats to them or the team are coming from. And it all starts with some desperate screams about zombies clawing at one’s face or the gun jamming while trying to reload.

What quest? Any quest! From fantasy quests where you save a mystical realm in Trickster, to more punishing adventures in Rec Room where you have the choice of Fantasy, Medieval or Sci-Fi quests. Although there are distinctions in the level of difficulty or avatar customization, both titles task you with a greater purpose, arm you and your team, and send you off through magical portals into worlds unknown, full of danger and rewards. While the games themselves reward you in gold and tokens, the true reward is the journey as the saying goes. Like any quest, when a party is assembled different skill sets are required. From the Archer to the Sword, Shield or Wizard. And as such a higher level of coordination is required when getting in tricky situations. Teams lacking communication will falter and be forced to try again, but with each iteration, people will notice patterns, speak more, and slowly become an efficient ork killing machine.

3. Get creative! …but not dirty

Sometimes you need to unwind and art therapy has been a proven way to release stress for quite some time now. So why not grab a bunch of friends (up to 17 of them to be exact) and get creative in VR. Paint and sculpt together scenes from your favorite shows, relaxing sets or your own nightmares – I’ve heard it helps. With a title such as MasterpieceVR, one is limited mostly by the imagination, and when that fails, reference images can be provided to help spur the creative process.

Escape rooms are a thing of the past… the single cramped rooms with waiting lines and the embarrassment of asking for help… ow the fun! Well, fear not! With virtual Tales of Escape, pun intended, you have large expansive worlds to get lost in! A team of up to 6 players can frolic around the gravestones on the grounds of Sleepy Hollow, trying to dispel the curse of the Headless Horseman. And if it gets too chilly in the cold night among the dead, step inside the mansion and look through the books in the library for clues. I don’t know of any “escape rooms” that allow you to traverse such distances and can have zombies clawing at you from the walls of abandoned mine shafts.

These are just 4 of the things that will have you working together, and not against each other, in the world of Virtual Reality. Check out VRPlayin’s catalog for a full list of our experiences here.

The Ultimate Guide to Team Building in Toronto
April 24, 2018