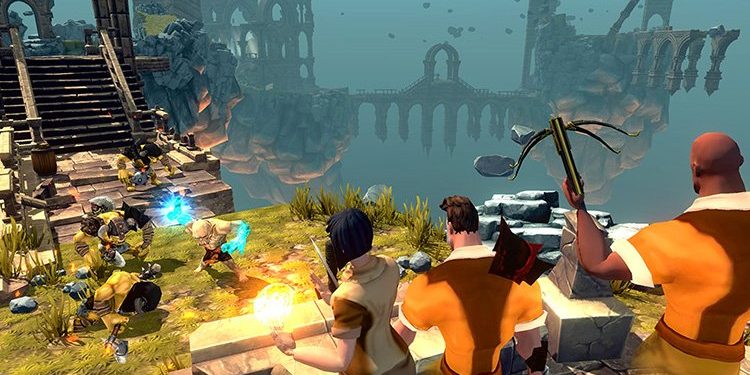 Greetings brave adventurer! Today we form a party that will venture forth into mystical realms and push back the forces of evil that have shattered a once beautiful world! That’s right. Continuing with our multiplayer content series, this week we dive into the world of Trickster and get Medieval on some orcs!

Compared to some other games, Trickster is a more laid-back experience when it comes to progression and the level of challenge. Each time you step through a mystical portal to the same location, the world will look different. Think Diablo, with its ever changing maps. But more so than just the look of the world, Trickster changes the objective as well, keeping things fresh and players on their toes. But it’s not just the maps that are tricky, so too are the challenges. While each map can have one of six quests, the number and strength of the enemies, not to mention the complexity of the map itself, increases depending on the difficulty of the mission.

Collaboration and communication are important in Trickster, not so much when it comes to tactics and planning, but more so when dealing with your navigation on the flying islands. The fact is, people are going to get lost and will have no choice but to talk to each other in order to find their way back. Compared to Rec Room, Trickster is more of a casual experience. It’s rewarding, but the challenge is always surmountable within the first or second try. Not only does this make things less frustrating, it can be a fun activity for an already well-developed team or an equally fun ice-breaker for newly formed groups that need a nudge to get social beyond the occasional beer after work (although we serve those too).

To touch on the combat, slaying an orc with a single sword strike or catching a volley of enemy arrows by raising your shield can certainly make one feel heroic and will be sure to be two of many such satisfying experiences, further enhanced by your party witnessing the deeds. And of course, as a versatile adventurer, where would you be without your trusty bow and sword? While in QuiVR you are Legolas defending the walls at Helm’s Deep, in Trickster not only are you an archer, but you you have to use your sword as well, allowing you to do something like this:

(No, i don’t have a fixation with Orlando Bloom or Legolas, I think)

Unlike traditional adventure games where there is a mage, a warrior and a rogue, Trickster does not lock you in a specific role. Even if you embody the tank with your shield, or the berserker with your twin swords, it can change depending on your situation should you be the last member of your party with arrows left, or if you need to jump in the thicket to save an ally.

While the game does become significantly challenging in later levels, most first time users will need to show some dedication to get far enough to see it. Fortunately, the combination of getting accustomed to the virtual world, alongside the quests themselves, should serve as enough of a catalyst for strengthening the bonds between individuals to more than make up for the early parts being less challenging. That’s why we believe that Trickster is a fun experience that will bring your team closer together by working toward a common goal where the focus is more on enjoying the experience and embodying the adventurer inside you as you fight through waves of orcs. Unlike some of our other titles that are more focused on competition between individuals, Trickster will have your team collaborating and having each other’s back.

Trickster is a true VR Dungeon Crawler, even if you’re focused on the sky most of the time, and will be a great, long lasting memory for all the brave souls who step through its portal and strap on a VR headset. If this post has sparked your interest don’t hesitate to reach out and we will ensure that your party/outing/office will go on a most excellent adventure.

Next week we’ll be going into the future and become a deadly ninja assassin with Sairento!