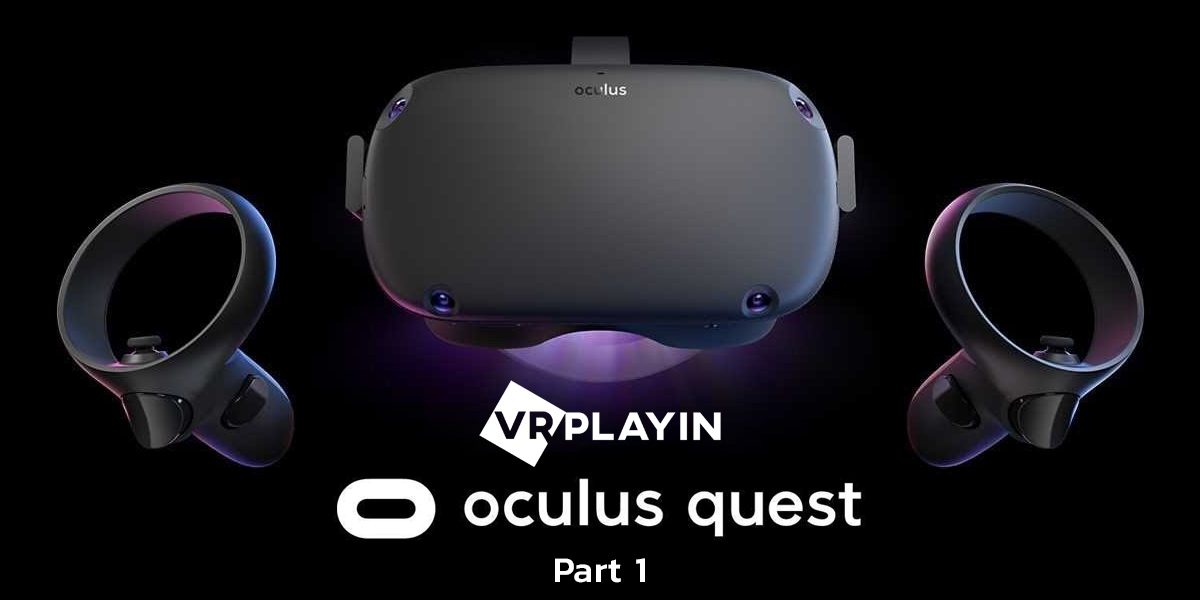 You may have heard of a little company called Oculus

in the last year or two or their new headset called the Oculus Quest. If you’re familiar with VR feel free to skip right to the next paragraph, but for those of you who aren’t, quick backstory.  Oculus began as a small studio with the idea of bringing head-mounted displays to the mainstream market (keep in mind they were to be the first to do this). After launching their first prototype the DK1, Facebook, another small company you may have heard about, decided to give them some money… and by some money, I mean 2 Billion dollars, and by giving some money I really mean they acquired the whole studio along with the name. You can read more about the acquisition on TechCrunch’s website here.

Facebook believing in the future of VR for a long time was a bit of a joke in the industry. Ever since HTC came out with the Vive, it smoked the original Oculus Rift into the ground in a lot of ways. But now things are different. Times have changed and the race for ultra-powerful, pc-tethered, high resolution headsets is taking a bit of a side-step in terms of goals. Enter the Oculus Quest. Facebook’s new version of what VR should be: No cables, no PC, just wireless fun. So let’s take a look and see how they did.

As a bit of a PC-VR purist, I really wanted to hate this headset when it first came out. Let me explain. The Oculus quest has been out for about two months now and I wanted to give you my thoughts on it because it does some things really well that the PC-based headsets do, but it also lacks a few major features which, for the price point is understandable. To start this off I want to talk about my a couple favourite things about the headset and then I’ll talk about the stuff that I don’t really love.

First things first, I want to talk about the quality of the panel because I was actually really surprised about this coming from an HTC Vive and using the Vive Pro as well as the new Valve Index. I was expecting this headset to have lots of screen door effect, be not that high resolution and the frame rate to be really bad. And honestly even though this panel is only 72 Hertz, it’s actually really not that noticeable in most games.

The fact that I can play on a 72 Hertz panel versus a Vive and just go back and forth and not really care about the differences, that really means that the Quest is doing something really well. There are some experiences in which you start to notice a few hiccups in the performance but the display itself is is phenomenal. It’s really sharp, the colors are amazing and the refresh rate honestly is more than adequate. If any of you are worried that because the Quest starts at $399 the display nut might not be that good, prepare to be surprised because this thing is quite awesome.

The second thing that I love about the Oculus Quest is obviously the six degrees of freedom (6DOF). If you are unfamiliar with VR I’ll try to keep this short: Six degrees of freedom basically means that if I take a real step in real life it moves me one step in the game. If you’re crouching, dodging and shooting around using controllers to map your hands out, it tracks all of that. Six degrees of freedom has usually been solely locked to computer based VR. You had to set up 2 sensors for the Vive, and 2 or 3 on the Oculus Rift just to build out your space to play. It’s been a huge deal for a long time and it’s been a big inhibitor for a lot of people just getting into VR; they can’t dedicate a space to it. 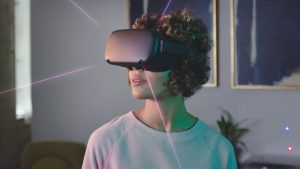 The amazing thing about the Oculus Quest is that you can literally just put on the headset and the four ultra-wide cameras look at the space figure around you and figure out where the walls and floor is. You literally just draw a circle on the floor and it just boots up the game. It’s absolutely amazing and the fact that it remembers five spaces, you can go to your friends house and if it detects the same space you drew last time you were there, it will pop you right back into the game. I think that’s such a big deal because a lot of people are really scared to get into VR because it’s so intimidating due to all the setup and all the hardware costs.

The six degrees of freedom on the Quest is absolutely awesome in terms of quality. There’s barely ever any tracking issues. Obviously if you’re outside or something like that there’s some issues, you have to play in the shade. The only time I’ve ever had a tracking issue is with the controllers but we’ll talk about that in a little bit. In terms of the headset rotation and tracking, It’s been rock solid for me and I absolutely love that.

The third thing that I love about the Quest is the speakers and I know that sounds really silly but coming from a PC-based VR headset. The fact that I had to put on headphones and I would get completely isolated from the outside world is one of those things that it’s fun but you just get so hot. You have your earphones on, your headset on, it gets hot and you just lose yourself. The fact that the Quest allows you to put the headset on and it starts playing sound around your ears is awesome. I’ve been able to play and have conversations with people without a problem.

I was recently letting my parents and my grandparents try the headset and I was able to talk to them and tell them things that they might not have otherwise heard. So when they’re playing Beat Saber and they’re stepping too far forward, I can just say, “Hey, take a quick step back” and they do because they can still hear you. It’s honestly such a big deal for them and the fact that the sound comes straight into your ears, it’s pretty close to surround. There’s a few times where I’ve been like whoa someone’s behind me and it really helped me position the enemy.

A+ For The Speakers

I was  pleasantly surprised by the speakers on the Quest and I have not once plugged in headphones ever and I don’t think that I will be. For the most part, if you’re playing in a loud environment then obviously you’ll probably want some headphones, but the nice thing is you can just pop them in either headphone jack on the side of the headset. I think this is probably my favourite, most underrated feature of the Quest.  They’re not amazing sounding unfortunately, and it would be awesome if they were better, but they’re just tucked away in the head strap so I’ll take a little bit lower quality for not having to put on hot, sweaty headphones

I understand the skepticism but the amazing thing about the Quest is that I ultimately didn’t care about the quality of the games and that’s the big thing here. If you are a hundred percent purist and need the highest quality games, as in you’re that guy that will sacrifice frame rate for getting ultra settings then yeah this probably isn’t the headset for you. As long as you set your expectations accordingly, again this is basically a phone running this headset, you have to understand that six degrees of freedom, 72 Hertz, and high resolution, something has to be sacrificed here. 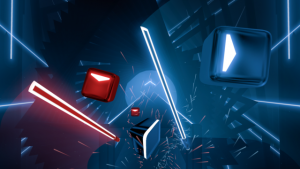 Obviously processing power is a big limiting factor. So quality takes a hit in some games but the amazing thing is that because it runs at pretty solid frame rates and because the display looks good as well as because the six degrees of freedom is there, I’m very happy to take a hit on the quality. Beat Saber looks great for example. The first time and put it on I didn’t even notice a difference between the PC version and this one. (Obviously if you’re looking you can see them). Superhot looks great too, even though it’s an experience that just looks awesome on its own. You don’t have to worry about the quality overall.

But There Are Limitations

Games like Sairento, which I really love, obviously takes a huge, noticeable hit in comparison to the regular game. They touted as having all new maps and stuff like but that is just because the Quest can’t run the power of the old maps and it basically looks like Tony Hawk Pro Skater from 2000. That’s kind of what the the equivalent I would put that too. But I still don’t care because I’m jumping and flying around, I’m doing backflips, I’m jumping in slow motion, shooting people, I just don’t care about the quality. The fact that it still runs well enough that it’s still immerses you is is truly forgivable.

And then there’s games that because of the limited factor, kind of take that into account. Games like Rec Room which are super easy to port over and games like Journey of the Gods looks phenomenal. It is a very low-poly game but it totally works for this sort of atmosphere. Games like again SuperHot, Beat Saber, all these games that don’t need high-end graphics run amazing on this headset.

Come back on Thursday when I talk about the things I don’t like about the Oculus Quest! See you then.