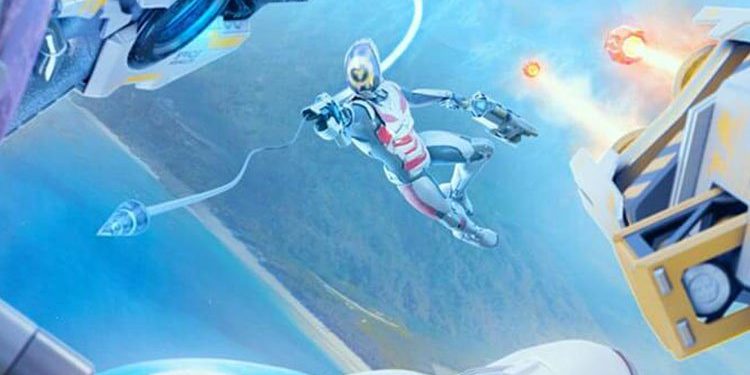 The future! It’s so cool that people need reminders of the past. And how else to honor our violent past and its glorious architecture than to jump into anti-gravity suits and shoot each other mid-air in ancient countries! This entry in the multiplayer content series will tackle Skyfront, a 10 player arena shooter that to the veteran gamer will seem reminiscent of the old Quake games and to the younger generation a “flying Overwatch” may come to mind.

Starting with the setting, as of writing Skyfront has 2 arenas to choose from: Greece and Egypt. Two large worlds where individual players can get lost in but teams can develop strategies and use the world to their advantage. Greece is a floating set of cluttered buildings where danger can lay behind any corner, whereas Egypt is more spread out and open with 4 structures surrounding the central pyramid.

As for the action, despite the flying element to it, Skyfront is one of the easier games to pick up due to the simplicity of the controls. Teams of 3 to 5 players can compete against each other for kills, while a free-for-all mode will offer its own individualistic reward.

Apart from a large arsenal that goes from the modest pistol or minigun to a rocket launcher, players also have access to special abilities built into their suits. This brings a great tactical advantage to a team that can use one of their power ups to become invisible at the same time.

But when it comes to team building, even outside the context, we have observed weaker teams coming together after losing to teams composed of stronger individual players. After repeated defeats, the weak team bonded and started developing strategies surrounding cooperation to target the strong players or to focus enemy stragglers. And in doing so while composed of less skilled individuals, a stronger team emerged, turning around a 3-1 to 4-5 after working together. Effectively winning in games by the end of their session.

While Skyfront does not offer more complex objective based game modes, it becomes a more competitive environment the more time people spend in it, and that forces people to talk. Communicating while playing brings an understanding of each others expectations and limitations. Lastly, understanding the shared “traumatic” experience (as mentioned in a previous post that touches all multiplayer experiences) brings the team together to have it function like a well-oiled machine. So from friends to the office to a birthday party, the bonds between people will grow stronger.

And with any team-based experience, especially in a space such as VRPlayin, multiple teams can compete against each other in a tournament.

The next post will take a more relaxing turn with Cloudlands, a 4 player mini golf experience that brings you challenges you wouldn’t see possible outside of VR.