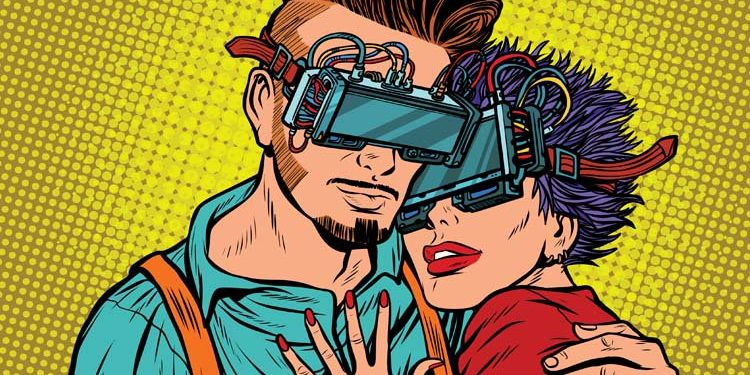 It’s impossible to deny that Virtual Reality is steadily taking the world by storm. Most recently, the film release of Ready Player One (based on the novel by Ernest Cline), has helped the popularity of VR rise and put the medium on people’s minds. However, today we’re going to talk about its influence specifically on the music industry and popular culture in general.

Virtual Reality has been mentioned in the lyrics of many recent mainstream releases. Perhaps, most notably, when musician Father John Misty premiered his song Total Entertainment Forever on Saturday Night Live back in March of last year. The opening lyrics being “Bedding Taylor Swift, every night inside the Oculus Rift” obviously caused a bit of a stir, but in a statement to Exclaim!, Father John Misty (real name Josh Tillman) was quick to clarify that the lyric was about the technology in a negative sense, elaborating by claiming he is “holding a mirror up to society’s “disturbing,” obsessive, all-consuming taste for entertainment of all forms.”

Okay, so maybe it’s safe to say that Father John Misty isn’t the biggest fan of the VR technology. Moving on to something more positive, iconic Icelandic artist Björk debut a Virtual Reality Exhibition in L.A. last May. The exhibition, titled Björk Digital, featured 360-degree VR music videos from her 2015 studio album, Vulnicura. Bjork first began experimenting with VR technology back in 2014, and is obviously a fan of the medium and its potential in the music industry, calling VR “a theatre able to capture the emotional landscape of (Vulnicura).”

It doesn’t stop there. Missing your favourite band in concert? No problem, catch the show in Virtual Reality. Live concerts being filmed and streamed in VR are proving to be the next best thing to seeing a concert in person. Because of the immersiveness of VR, virtually putting yourself in the middle of the crowd at a live show proves to be a promising (and cheaper) alternative to attending in the flesh. With multiple cameras set up that can capture 360-degree images from a variety of vantage points – including on stage – live concerts are now able to reach a wider audience in a better medium than just watching on a standard television screen. I don’t know about you, but this makes me pretty excited for the future.

Virtual Reality Pictionary, anyone? Back in December of 2016, popular late-night host Jimmy Fallon debut a VR Pictionary segment using the HTC Vive and the paint app Tilt Brush. It’s basically the rules of classic pictionary with the added fun of being cut off from the outside world in a VR headset and putting your painting skills to the test. The ‘guessers’ can see what you are drawing on a monitor, but you are blinded from their gestures or reactions which adds a bit of a twist on the standard pictionary rules. My personal favourite is when Scarlett Johansson tried her hand at drawing a virtual pinball machine.

The influence of VR even extends to the fashion world. Last year, Kristen Stewart and Karl Lagerfeld collaborated on Chanel’s new handbag line, the Gabrielle – the look of which is inspired by Virtual-Reality glasses according to Lagerfeld. It’s even being used to achieve new records. In 2016, a new Guinness World Record was set when Jack McNee spent the longest consecutive time in VR at 36 hours. Yes, you read that right – thirty-six hours. (The previous record was set at just over 25 hours).

Even back in 2014, when VR was still slowly being introduced to the world, New York’s Museum of Pop Culture (MoPOP) created the world’s first Virtual Reality Haunted House. As someone who is always searching for a good scare, you will definitely catch me first in line if this ever makes its way to Toronto.

According to a 2017 report by Forrester Research, 42 percent of US adults had never heard of VR and an additional 46 percent predicted that they don’t see a use for VR in their lives. However, a 2016 report by Research and Markets revealed that 83 percent of consumers have a positive attitude toward VR, which was up from 72 percent in 2015.

Want to try out Virtual Reality for yourself? Check out our group packages below and come to your own verdict as to what all the hype is about:

So, what’s the conclusion? I guess only time will tell. But by looking at the progression of VR from the past couple of years to the present, I’d say we can expect to live a lot more of life through Virtual Reality in the years to come, no matter what experience you choose to immerse yourself into.