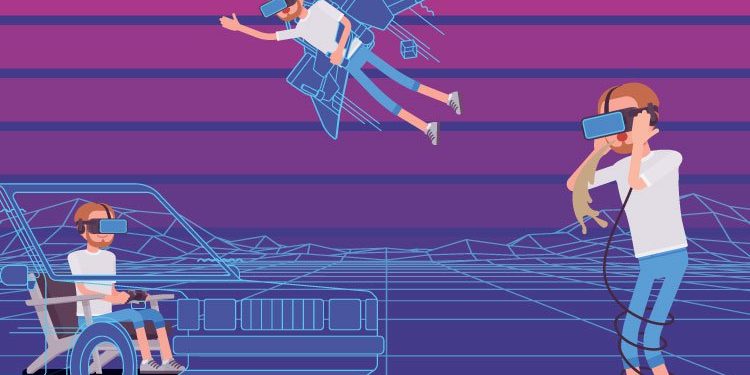 Although we’ve touched on the topic of motion sickness in Virtual Reality several times, most notably in this article here, today we’re going to talk less on the hardware side and more on the content and physiological aspects of motion sickness.

Motion sickness is the feeling many get when the motion sensed by their inner ear is different from that which they’re seeing. Most commonly this happens with cars and boats, and here’s why:

While in a vehicle, the inner ear does not feel all that much movement.

But because roads normally have a lot of things besides them – trees, buildings, other cars – and because the car is likely going reasonably fast, we perceive the motion visually, seeing ourselves moving without registering it. That’s disconnect number one. The best way to avoid feeling sick in this manner is by looking forward, the main reason why drivers or people in the front seat don’t get motion sickness often, or you could always just close your eyes and not see anything. Reading in the car is story for another time.

Traveling in a boat is the opposite of traveling in a car. No matter which way you look, the horizon is fixed. We see ourselves standing still, but our inner ear registers the movement of the boat on the waves, and it’s that disconnect that gets us sea sick.

As for planes, cruise ships and most trains, the benefits of both car and boat come into play and because of it the vast majority of people have no issue when using them.

Like the car, you are in an enclosed space that negates almost all sensations of movement, and if you look outside the world is moving at a very slow pace, as all reference objects are either too far away or large enough to seem like they are standing still.

So how does VR make peace with both the visual and the inner ear? As the technology is limited to tricking your eyes and ears through images and sounds, there isn’t anything accessible yet that deals with moving around, especially in large spaces.

The widely adopted means of movement in most VR games, beyond moving in your nicely padded space (least that’s what we have), is teleportation.

Popular titles in our catalogue such as Rec Room and Cowbots and Aliens, have teleportation as their primary movement mechanic. As demonstrated in the gif above, teleportation happens in the blink of an eye, literally in most cases. Because of this, the brain does not have to process information about movement. It’s in a new place relative to before and the interaction with the world is the same.

On the other hand, a popular game like Trickster prefers to give users the ability to choose between teleportation and walking. Where walking is akin to being in the back seat for a car ride so if you can stomach that, you can probably stomach “walking” in Trickster. Of course should prefer to teleport, our helpful staff will be there to help you make that happen.

Taking things in a completely different direction, we have a flying game like Skyfront, a free-for-all flying shoot ‘em up. Though it sounds like it could carry the possibility of being the game that gets the most users sick, the cool thing about Skyfront is that it uses the plane/train approach to trick the mind into not getting sick. By having extremely large, open spaced maps and huge buildings, Skyfront manages to create the illusion that you are going reasonably slow and that the world you are flying in is huge.

Want to try the multiplayer games mentioned above with your coworkers for your next team building event? Take a look at our Corporate Events page and see what we can offer you – motion sickness free!

Finally there are driving games and roller coasters in VR. When it comes to roller coasters, my general recommendation is: “Don’t.” As for driving, there is a reason why we offer our VR driving simulator complementary after the end of your session. Driving functions similarly to a car, at least in our space, but due to the lack of inertia, not feeling the breaks or the acceleration for example means that despite being in the driver’s seat, motion sickness can still hit you like the 300kph beast you’re driving. This, we’ve noticed, may have more to do with driving experience, as those with experience driving are accustomed to having visual stimuli connected to the feeling of their inner ear, while those who are not used to driving – young kids for instance – rarely feel any motion sickness at all.

I hope this has been educational, and if you have any other health concerns regarding VR, you should consider reading our article on the Top 5 Health Concerns in VR. And rest assured that our trained staff of VR experts will ensure that you have the best possible time whenever you do come visit us!