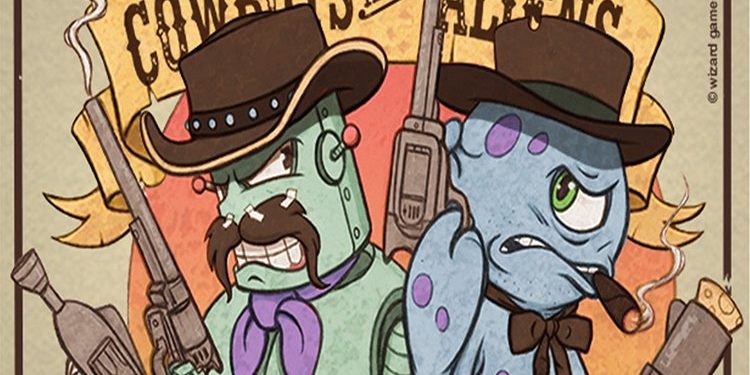 This week we’re going back in time to an adventure to the wild wild west! Back to a time when Cowbots fired their rayguns with deadly accuracy and spilling a drink can get you punched by an angry blue Alien.

If Sairento is my go to example for what virtual reality can do for realistic movement, Cowbots and Aliens is my preferred example of what a game can be when it doesn’t take itself too seriously, a game that wants you to be silly with it. Besides, what serious person would enter a saloon in the middle of a brawl only to be taken out by someone bringing a table to a chair fight?

To better clarify the idea of “real realism” and how it may apply, for example, to a chair fight, we first have to talk a bit about how the game functions.

When we use the term “real realism” we’re using it to describe the idea that players can reasonably pick up and interact with all the objects someone could in a real setting. Just as you could pick up a chair and throw it at someone for instance, it’s highly unlikely that you could pick up the piano. You could play it, depending on your skill of course, but certainly not throw it across the room. Everything in the game can be used as a weapon or as a means of defending yourself, an effect that is heightened by its comedic avatar design. You are either a green Cowbot with a fashionable hat and taped on mustache, or a blue jelly blob, Alien, with a monocle and cigar.

With players set into two teams by default, Cowbots and Aliens can hold up to 8 players in Deathmatch, Team-Deathmatch and Gold Rush, while 4 players can play a “No Guns” free for all brawl.  The game randomly assigns teams at the start of each new round of Team Deathmatch and Gold Rush, and this does wonders when it comes to team dynamics as it destroys any form of internal hierarchy that the group came with and it puts everyone on a relatively equal playing field.

Deathmatch and Team Deathmatch are self explanatory but as one would expect, Gold Rush is where the true value of this title comes from. The team with the most gold when the time runs out wins. It’s as simple as that. But of course there is a catch. There is a limited supply of gold at equal distance from each teams cart, but getting it and returning it back through heavy fighting is a big challenge. Just getting a single gold bar back to the cart requires communication and strategy, yet should one team overpower the other and secure more gold before the timer runs out, the other team can simply steal the gold back. And this is where strategy and communication is crucial, as simply removing a gold bar from your opponent’s cart will have them lose a point, enough to change the balance of the game. Once the round is over, teams get shuffled and it all begins again. With each round, players will better understand the value of communication and cooperation, hopefully without holding grudges as their opponents may be their allies in the next rounds.

So if you want to transcend into the singularity, become one with the machine and shoot, punch or stab some aliens with your coworkers, check out our Corporate Event Packages in consideration for your next company event!

That’s it for Cowbots and Aliens. Next week we’ll be talking about flying hovercrafts jetting across the desert and their brave pilots who fight it out in the sandstorms.